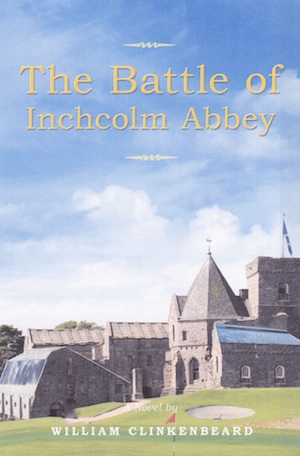 Davis Lane is a freelance theologian who, in a secular age, doesn’t get a lot of work opportunities. Until, that is, he receives a mysterious invitation to go to Inchcolm and its ruined medieval abbey in Scotland’s Firth of Forth. It’s there that Alexander Morton, American property tycoon, is hatching plans to build the world’s holiest golf course along with a hotel and casino. An enigmatic lady in  tweed and a trilby commissions Lane to research  the island and its abbey in order to advise the parties affected by the extravagant development. The commission dredges up painful memories of his recent encounter with the CIA.

The research is intriguing, drawing Lane into a fascinating maelstrom of history and legend. He discovers that the chill waters of the Forth not only host seabirds and seals, but also the coffin of the man who was supposed to be buried within the abbey. The Augustinian canons of the abbey may have been devoted to peace and love, but they turn out to be anything but meek and mild. Despite misgivings, Lane is impressed by the plans of the tycoon and also by his beautiful daughter. The proposed development sparks off angry demonstrations, resulting in a death threat.

Set in the Forth Estuary and moving between Edinburgh and Fife, The Battle of Inchcolm Abbey is a work of fiction carefully woven around history and legend. The central character of this theological novel attempts to depict authentic faith and ethics in a secular and morally complex.

For the first six months from the date of publication one-half of all royalties from sales will be donated equally to two of the charities I feel are important:Goats for Life and Wateraid.Goats for Life was started in 2007 by Betsy and David Kain as a response to the genocide on Rwanda. Working with local partners, goats and cows are purchased as gifts for the people. The animals and their products may then be used to help families become self-sufficient. Visit the website www.goatsforlife.org for more information. Wateraid works in Africa, Asia and the Pacific to provide clean water, sanitation, and hygiene education for people. The charity also works with local partners to provide the simple technology which can be maintained by the community. Again, the aim is self-sufficiency.  See www.watreraid.org/uk for details.